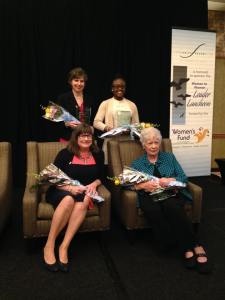 Judge Lisa Wilson of the Circuit Court of Peoria County received the Business/Professions Award from the Women’s Fund of Central Illinois at their Women to Women Leader Luncheon on May 17th. Judge Wilson chairs PILI’s Tenth Judicial Circuit Pro Bono Committee and is a leader in her community and in the legal profession.

Judge Wilson received her law degree from Northern Illinois University College of Law and worked as a staff attorney first at Land of Lincoln Legal Assistance Foundation in Springfield, and then at Prairie State Legal Services in Peoria. She provided free legal advocacy for low-income and senior clients in a variety of civil matters pertaining to domestic violence, family law, housing, consumer, educational rights and public benefits.

In December 2009, Judge Wilson received an appointment as Associate Judge in the Tenth Judicial Circuit. She spend her first two years in Traffic Court in Tazewell County, and then served  in Peoria County presiding over Orders of Protection, Adoptions, Small Claims, Child Support, Ordinance Citations and Civil and Criminal Mental Health Court. As of January 2015, she is presiding over Peoria County’s DUI Court as well as the three criminal treatment courts: Mental Health Court, Veterans Court and Drug Court.

In addition to chairing PILI’s Tenth Judicial Circuit Pro Bono Committee, Judge Wilson serves on several committees of the Peoria County Bar Association and is a member of the Abraham Lincoln Inns of Court in Peoria. She has also served as faculty for the Illinois Judicial Educational Conference in 2012 and at New Judges School since 2012. Judge Wilson has served on various non-for- profit boards in the past: Habitat for Humanity of the Greater Peoria Area, Counseling and Family Services, Peoria Area Civic Chorale, and the Mental Health Association. She received the Prairie State Legal Services Excellence Award in 1995; 40 Leaders Under 40 Award in 2000; the WEEK 25 Women in Leadership Award in 2004; the Illinois Legal Aid Online Legal Advocate of the Month in March 2009 and the 2011 Pekin YWCA Outstanding Achievement Professions Award.

PILI is delighted that Judge Wilson was selected to receive this prestigious award from among several deserving nominees. Congratulations to Judge Walker, and thank you for all you do for your community and for the legal profession!