Did you miss the Pro Bono Week virtual event? Check it out here »

Find a Pro Bono Opportunity in the Third Judicial Circuit » 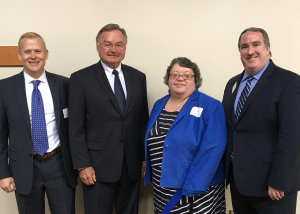 The Committee was launched in 2011 under the leadership of the Honorable Barbara Crowder who served as chair until her retirement in 2018. The Committee opened a Legal Advice Conference Center in the Madison County courthouse on October 27, 2011 to provide brief advice and information to self-represented litigants. In 2018, expanded its help desk to provide legal services at the Bond County courthouse as well.

The Committee offers several pro bono trainings, including a brown bag CLE lunch series which is provided on a monthly basis. This Committee also organizes an annual luncheon to mark Pro Bono Week in October, to give out local pro bono awards. The Third Judicial Circuit Committee’s Pro Bono Pledge was rolled out in September 2014.