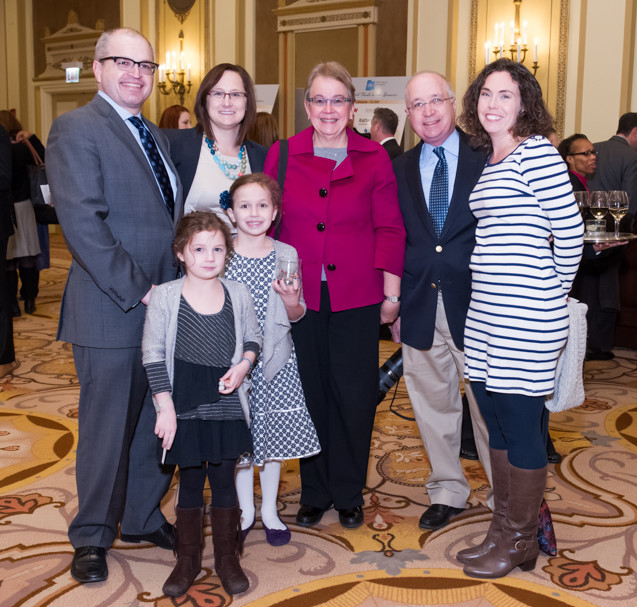 Max with his family
at our Annual Awards Luncheon

Max Stein has demonstrated a strong commitment to pro bono service from the very beginning of his legal career. His connection to PILI began early too: before even starting law school, he attended PILI luncheons with his grandfather, Hubert Will, a federal judge in Chicago, and with his mother, Nikki Will Stein, who later became a member of PILI’s Board of Directors. Later, Max had the opportunity to take several pro bono legal matters while working as a paralegal at Mayer Brown. After graduating with honors and as a member of the Order of the Coif from Chicago-Kent College of Law, he took a PILI Fellowship at the Sargent Shriver National Center on Poverty Law, sponsored by Sachnoff & Weaver.

Following his Fellowship and with his firm’s support, Max remained actively involved in pro bono as a new litigation associate, doing pro bono work for a number of different organizations. Max’s PILI Fellowship at the Shriver Center played an important role in that work, as connections he made during his Fellowship opened fruitful pro bono opportunities for his firm that turned into a lasting relationship. One pro bono matter Max was involved in was a pioneering housing case with national implications in which Sachnoff attorneys partnered with the Shriver Center to represent the Jane Addams Senior Caucus and preserve low-income senior housing. Both the Shriver Center and the Jane Addams Senior Caucus honored Max and his colleagues for their dedication and service.

Max stayed at Sachnoff through the merger with Reed Smith in 2007, and at the start of this year he moved to Boodell & Domanskis, LLP as a member in their litigation group. Max concentrates his practice in commercial litigation and has extensive experience representing clients in a wide variety of disputes, with particular experience in shareholder disputes and business divorces, breach of contract matters, bank and loan-related claims, civil RICO claims, and consumer fraud claims. He is involved in several community groups, and has been instrumental in connecting his new firm with the pro bono projects that are near to his heart. Max currently serves as the president of the Board of Directors at the Chicago Lawyers’ Committee for Civil Rights Under Law. Jay Readey, Executive Director of the Chicago Lawyers’ Committee, says that Max has been “a steady hand at the helm of CLCCRUL’s board.” Jay added that Max has “a very finely-tuned sense of the role of a public interest organization in the wider community, and with a long practice in the private bar that has been complemented by an active tradition of pro bono service, he also has an equally strong sense of what the private bar can offer to the public interest via pro bono service. This combination of sensibilities is exactly the mix that PILI honors through its programs and awards.”

PILI is proud to honor Max with this award in recognition of his longstanding commitment and dedication to serving those in need.