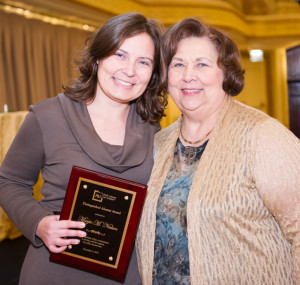 Marjie with her mother at our Annual Awards Luncheon

Marjie Nielsen has exhibited an unwavering dedication to serving the underserved throughout her legal career. Marjie was a PILI Intern at the Chicago Legal Clinic, and after graduating from Northwestern University School of Law, Marjie joined the staff at CLC and still works there today. She has helped thousands of low-income clients in cases involving family law issues, domestic violence, relief from criminal records, and more. Moreover, her willingness to support other attorneys and organizations has yielded new opportunities for collaboration that increase access to justice in Chicago.

Marjie created and directs the Ex-Offender Advocacy Program at Chicago Legal Clinic, which assists individuals with criminal records who have overcome the problems of their past and who have changed their lives, often in dramatic fashion. Marjie’s advocacy efforts have made relief from criminal records more accessible to those seeking second chances. She has drafted key pieces of legislation, testified as an expert witness before legislative committees, and argued precedent-setting cases. Marjie forged a strong partnership with Cabrini Green Legal Aid and, in collaboration with CGLA, created an expungement and sealing pro se advice desk at the Leighton Criminal Court Building. Marjie and the other attorneys and law students who staff the desk succeeded in eliminating a year-long backlog of cases, making this critical relief available to individuals within 90 days of filing. Marjie continues to supervise the desk weekly, assisting pro se individuals to obtain expungement and sealing.

In her day-to-day work at CLC’s Austin office, Marjie carries a full domestic relations case load, including many domestic violence cases. In late 2011, Marjie and CLC pro bono attorney Kevin Johnson developed the Family Law Info Session and Q & A, a free weekly seminar for pro se litigants at the Daley Center. Since January 2012, Marjie and Kevin have answered questions from hundreds of pro se individuals.

Marjie is also a dedicated law student intern supervisor at CLC, committed to supporting a new generation of effective public interest lawyers. As one of her nominators put it, “Marjie is deserving of this award for so many reasons. She is distinguished in the quality of her work, in her devotion to her low-income clients, in her training of law students and new attorneys, and in the investment she makes every day in trying to make the world a better place. Her PILI Internship was the beginning to a powerful career committed to changing lives.” PILI is proud to present this award to Marjie in recognition of her commitment to service and her passion for public interest law.