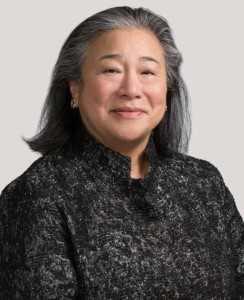 PILI is excited to announce that Christina M. Tchen of Buckley Sandler will be speaking at PILI’s 40th Anniversary Awards Gala on Thursday, November 30th at the Palmer House Hilton.

Tina is the embodiment of PILI’s vision of service within the legal profession. She began her legal career as a PILI Law Student Intern serving at BPI, one of PILI’s first Participating Agencies. Tina carried her commitment to service into her private practice, demonstrating a strong passion to helping those in need throughout her career. She was one of the inaugural recipients of PILI’s Distinguished Alumni Awards and continues to be a source of pride for PILI’s Alumni Network.

Tina, who received her Juris Doctor from Northwestern School of Law, was recently named a Partner in the Chicago office of Buckley Sandler LLP. She spent the last eight years in Washington D.C., working in the Obama Administration. Most recently, she served as Assistant to the President and Chief of Staff to First Lady Michelle Obama, and also served as the Executive Director for the Council on Women and Girls and the Director of the White House Office of Public Engagement.

In her current role, Tina provides corporations, boards of directors, and individuals with unique litigation, counseling, and crisis management expertise. Over the course of her extensive career, she has handled complex civil litigation and enforcement matters in both state and federal courts in Illinois and across the country. As a partner in corporate litigation at Skadden, where Tina practiced for 23 years, she represented major global corporations and their officers and directors in a wide range of matters, including shareholder class and derivative actions, securities litigation, corporate takeover battles, consumer class actions, constitutional issues, corporate investigations, government enforcement actions, executive compensation, and breach of contract litigation.

Throughout her career in private practice, Tina was a tireless advocate for ensuring access to justice for all, handling a variety of pro bono matters and working to ensure a more fair and accessible legal system.

She has received many awards in recognition of her work, including the Leadership Award from the Women’s Bar Association of Illinois (1999); “Women of Achievement” award from the Anti-Defamation League (1996); Chicago Lawyer “Person of the Year” (1994); and PILI’s Distinguished Alumni Award (1992). She has also been recognized as a Business Leader of Color by Chicago United (2005).

PILI is very excited to welcome her back to the Chicago legal community at our 40th Anniversary Awards Gala.