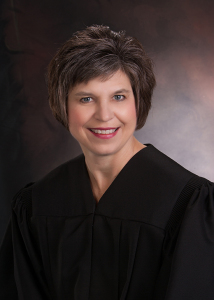 “From every stage of her career, Judge Wilson has focused on equal access to justice,” said Michael Bergmann, PILI’s Executive Director. “As Chair of the Tenth Judicial Circuit Pro Bono Committee, she is ensuring that more people obtain that access through pro bono service. We are so excited to have her speak to the power of pro bono at our Annual Pro Bono Reception this year.”

Judge Wilson graduated from the Northern Illinois University College of Law in 1987 and spent most of her career working at Prairie State Legal Services where she became a managing attorney. In 2009, she was named an associate judge in the Tenth Judicial Circuit. From the bench, she has focused on restorative justice and focusing on treatment and prevention. She presides over four criminal Problem Solving Courts in Peoria County:  Mental Health, Veterans, Drug and DUI as well as the traditional criminal DUI court.

A longtime advocate for pro bono service, Judge Wilson helped launch PILI’s Tenth Judicial Circuit Pro Bono Committee in 2013 and has since served as Committee Chair. Under her leadership, the Committee has hosted a robust slate of pro bono trainings and volunteer opportunities including two bi-monthly Self-Represented Litigant Help Desks at the Peoria and Tazewell County Courthouses. In February, the Committee launched the Tenth Judicial Circuit Conflict of Interest Pro Bono Referral Panel Pilot Program to provide a referral source for Prairie State Legal Services’ Peoria Office to send potential clients who have been denied service due to a conflict of interest. This is the first such panel in the state.

Among Judge Wilson’s many awards and honors are the  2016 Business/Professions Award from the Community Foundation of Central Illinois; the 2011 Pekin YWCA Outstanding Achievement Professions Award; the Illinois Legal Aid Online Legal Advocate in 2009; the WEEK 25 Women in Leadership Award in 2004; 40 Leaders Under 40 Award in 2000; and the Prairie State Legal Services Excellence Award in 1995.

You can see Judge Wilson at the Annual Pro Bono Reception on June 20th at the Ivy Room at Tree Studios in Chicago. At that event, we will also unveil the 2018 Pro Bono Recognition Roster and raise funds for PILI’s Pro Bono Initiative Program.

Learn more about the event »