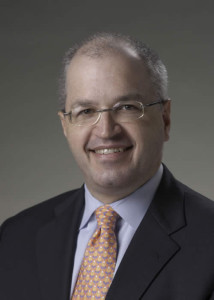 Max Stein was a PILI Fellow at the Sargent Shriver National Center on Poverty Law in 2001, but his connection to PILI started well before that.“I began going to the PILI luncheons with my grandfather, Hubert Will, a federal judge here in Chicago, and my mother, Nikki Will Stein who later became a member of the PILI Board, before I even went to law school,” Max explains. “They clearly had a sense of where my career might take me and began working early to make sure it included an awareness of the importance of public interest work and used PILI to raise that awareness.” When Max later began his legal career as a paralegal at Mayer Brown , he began to show that their efforts succeeded, as he had the opportunity to work on a number of pro bono matters there. The PILI Fellowship seemed like a natural step for Max upon graduation from law school. While at the Shriver Center, Max worked on several projects including research on TANF renewal and research for litigation that related to the CHA’s Plan for Revitalization. Says Max, “The most interesting part of my time there was not as much the work I did, but the glimpse it gave me into the wide variety of work that the organization as a whole was doing—from impact litigation to policy initiatives to lobbying, it was quite amazing to see.”

Max started as a litigation associate at Sachnoff & Weaver in the fall of 2001, after completing his PILI Fellowship, and stayed there through the merger with Reed Smith in 2007. With his firm’s support, he remained actively involved in pro bono, taking fair housing cases with the Shriver Center and serving on their Associate Board and Board of Directors. In fact, it was a connection he made during his Fellowship that helped keep him involved in pro bono work and opened a pro bono opportunity for his firm. “When I was at the Shriver Center, Raj Nayak was a PILI Intern there,” Max recounts. “A few years later, when I was at Sachnoff & Weaver, Raj was back at the Shriver Center as a staff attorney and enlisted the help of me and my colleagues in a housing case. It was the first of a number of successful partnerships with the Shriver Center for us and it happened because, thanks to PILI, both Raj and I were at the Shriver Center in the summer of 2001.” Since then, the Shriver Center and the Jane Addams Senior Caucus honored Max and his colleagues for their dedication and service. In addition to this ongoing volunteer work with the Shriver Center, Max was also asked to be the firm’s representative to the Board of the Chicago Lawyer’s Committee for Civil Rights Under Law, where he now serves as Board Chair.

At the beginning of 2013, Max left Reed Smith for Boodell & Domanskis. “My new firm is a smaller firm, and I have the opportunity to represent a wider variety of clients, including people with ‘real world’ legal needs,” says Max. And Max’s public interest work has found a home at his new firm too. “One of the first things that happened after I arrived is that Al Domanskis asked what we needed to do for the firm to join the Chicago Lawyers’ Committee for Civil Rights Under Law, as he knew that I was on the Board there,” Max recalls. “I was about to become the Board Chair, and this was a particularly gratifying moment, since it was a sign of my new firm’s commitment to causes that I hold dear.”

For Max, his PILI Fellowship helped cement a long-lasting relationship with the people of the Shriver Center. “They are some of my heroes both for the work they do and the way they do that work,” says Max. “That relationship has allowed me not only to have the opportunity to work with them on cases, but also has benefited me by helping me remember the broader issues that so many in our society face.” More than this, Max says his PILI Fellowship also accomplished the broader goal of making him aware of the importance of public interest legal organizations and pro bono work generally. “As a result, not only have I done pro bono work throughout my career, but I have also supported legal services organizations, both financially and by serving on boards and attending functions,” Max says. “In my mind, PILI, along with a strong family tradition, played a big role in these activities and these activities have resulted in some of the most meaningful parts of my career.”