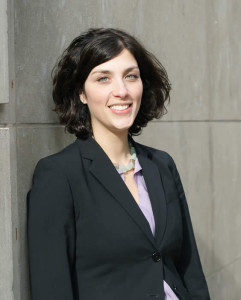 In June 2012, Illinois became the 28th state to establish an Access to Justice Commission (“Commission”). The purpose of the Commission is as far-reaching as it is urgent: “to promote, facilitate, and enhance equal access to justice with an emphasis on access to the Illinois civil courts and administrative agencies for all people, particularly the poor and vulnerable.” The Commission is chaired by Jeffrey D. Colman, partner at Jenner & Block, and recently hired Danielle Hirsch as its first Executive Director. In the last few months, the Commission has launched a series of listening conferences across the state to learn more about the most pressing legal needs and most promising opportunities in the access to justice area.

Before joining the Commission full-time, Danielle was involved in work of the Commission from her role at The Chicago Bar Foundation, where she and others provided volunteer staffing for the Commission (and several of her CBF colleagues continue to volunteer with the Commission). She officially became the Commission’s Executive Director in April. “There many exciting opportunities with this new Commission,” she said. “The Commission has come out very strong quickly with many ideas and proposals that are already improving access to justice.” One of the first achievements for the Commission was new Illinois Supreme Court Rule 10-101, which allows the Commission to develop and promulgate standardized legally sufficient, plain language forms for areas of law and practice where the Commission determines that there is a high volume of people without lawyers and where standardized forms would enhance access to justice. The Commission has a Forms Committee with multiple active subcommittees developing standardizing forms in several areas of law, including orders of protection, name change, expungement/sealing, certain procedural forms and divorce. Once forms and corresponding information sheets are completed, shared for 45 days of public comment and approved by the Commission’s Forms Committee, all such forms will available on the Illinois Supreme Court’s website, automated by Illinois Legal Aid Online and, hopefully, translated into multiple languages. “The Commission’s forms work is just one example of how our Commission is trying to make the process less intimidating for people interacting with the legal system,” Danielle says.
In addition to the work of the Forms Committtee, the Commission has many active and engaged committees working on issues ranging from language access and court and clerk guidance and training to pro bono and Illinois JusticeCorps.

To help determine additional priorities in access to justice and to engage with judicial system stakeholders in Illinois, the Commission is holding listening conferences in each of the five appellate districts across the state. The Commission has already held three listening conferences, in Peoria, DeKalb, and Champaign, and will hold two more later this month: one in Edwardsville on June 5, and one in Chicago on June 13. Many common themes have already emerged from the initial listening conferences. For example, in addition to issues surrounding language access, court guidance and training and standardized forms, listening conference participants have repeatedly raised issues of how to best provide legal services to the working poor and modest means clients, mentorship for young lawyers for pro bono cases, and the idea of allowing CLE credit for pro bono work. Danielle says one thing that she has learned in the course of these conferences is the important role that non-attorney advocates play in the legal process, including mental health providers, probation officers and domestic violence advocates. “Through these listening conferences, we have learned how valuable it is to involve all stakeholders in these dialogues given the richness of people’s differing experiences,” she explains. In addition to the listening conferences, the Commission has also convened the deans of the nine law schools in Illinois to brainstorm with them about how law schools can be a part of increasing access to justice. They have also convened top government lawyers from all branches of government in a bipartisan fashion to discuss how we can collaborate to improve access to justice. According to Danielle, “this last year has been a great opportunity to have a real dialogue about how the court system can better respond to the changing realities of our courts and needs of our communities.”

With a strong first year firmly under its belt, the Commission is looking ahead to a second year full of possibilities. They currently have a number of proposals before the Supreme Court, many of which could turn into major campaigns that would mobilize their substantial network of volunteers to affect large-scale change. One such proposal, suggested by the Deans Advisory Committee, is to modify the 711 rule that would reduce the number of credit hours necessary for a law student to receive a 711 license and clarify what types of work a law student could perform. Another is a proposed change to the judicial cannon that would clarify how judges can interact with people without lawyers. “Right now, we’re trying to focus on broad, systemic issues,” Danielle explains, though she doesn’t rule out the possibility of focusing on a particular issue in public interest law, like elder abuse or small claims. She knows that most of what the Commission is working on right now only scratches the surface of what needs to be done, but this is exactly what they have been directed to do: determine the greatest needs and the most effective potential solutions. As Danielle says, “looking forward, our only real limitations are those of our creativity.”

Given all of the potential and opportunity for the Access to Justice Commission in Illinois right now, it is impossible to know exactly what direction the Commission will take in the coming year. Still, Danielle says she always knows she can count on their Commissioners and volunteers, and on the support of the Supreme Court. “We have an incredibly supportive Illinois Supreme Court, a small but mighty group of 11 Commissioners who have really taken ownership of this Commission, and literally hundreds of excellent and dedicated volunteers and partners who make all of this work possible,” she says. “We’ve been really lucky to work with people who are committed to making the court system the best court system it can be.”

View all of PILI’s past Pro Bono Spotlights »