With the start of our new fiscal year, we are excited to welcome six new members of our Board of Directors! 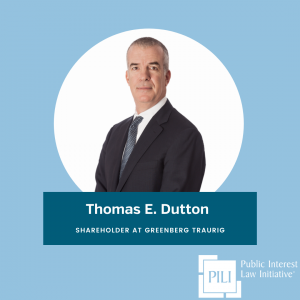 As a trial lawyer with more than 30 years of experience, Thomas Dutton has tried cases involving a variety of subject matters. He has first-chair jury trial, bench trial and ADR experience in class action and mass action toxic tort litigation, securities cases, post-acquisition disputes, product liability cases and fraud claims. From 2008 to 2016, he taught Trial Advocacy at the University of Chicago Law School.

At Greenberg Traurig, Tom’s practice focuses on complex commercial and tort litigation. He is currently involved in arbitrations with 20 states seeking to recover money under the Master Settlement Agreement between 46 states and the tobacco companies. He recently defended the nation’s largest third-party property management company and its principals in multi-jurisdiction claims for RICO, fraud and breach of fiduciary duty at privatized military housing projects in California, Virginia and Georgia. In 2012, after winning a dismissal of Fiat S.p.A., Tom resolved all claims against Fiat’s subsidiaries – CNH North America LLC, Fiat-Allis North America LLC, and CNH Global N.V. – for personal injuries and property damage allegedly caused by exposure to contaminants in the drinking water and groundwater near CNH manufacturing facilities in Grand Island, Nebraska. 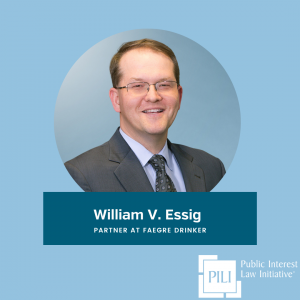 Bill Essig is a trial lawyer who defends pharmaceutical and medical device companies in mass tort and product liability litigation across the country. He has won defense verdicts as trial counsel in federal multidistrict litigation (MDL) and state court products liability litigation. Clients also frequently call on Bill to develop and prepare medical and scientific expert and company witnesses for trial. He also represents clients in commercial and white-collar criminal litigation.

Bill received the firm’s Pro Bono Service Award in 2014 for work representing clients referred through the Family Defense Center (now Ascend Justice) in challenging wrongful charges of abuse or neglect by the Illinois Department of Children and Family Services (DCFS). As the firm’s coordinator of the Ascend Justice Pro Bono Law Firm program, Bill has led a team of attorneys in obtaining multiple expungements for clients, including after appeal to the Illinois Appellate Court. Bill also served as court-appointed pro bono counsel for a pretrial detainee at Cook County Jail, who alleged unconstitutional denial of antipsychotic medications by correctional officers. 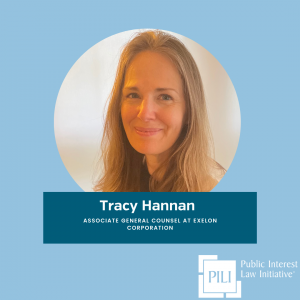 Tracy Hannan currently works as an Associate General Counsel in Litigation for Exelon Corporation. Prior to joining Exelon in 2014, Tracy was a litigation partner at Wildman Harrold. Tracy has been active in pro bono throughout her career. Most recently, she was named co-chair of Exelon Legal’s Pro Bono Committee in 2019. In that role, Tracy identified and coordinated pro bono opportunities for the Chicago legal team, including attorneys and non-attorneys, and additionally led Exelon’s Annual All Hands Pro Bono event.

Individually, Tracy recently represented a pro bono client who was sentenced to life without parole for crimes he committed as a juvenile. Following a resentencing hearing and appeal, Tracy secured a reduced sentence and subsequently secured an even earlier release through clemency. The individual was released just before Christmas in 2020, after having served 28 years in prison since the age of 18. A committed pro bono advocate, Tracy currently represents two siblings seeking asylum relief in immigration proceedings.

Clinical Professor at the Northern Illinois University College of Law 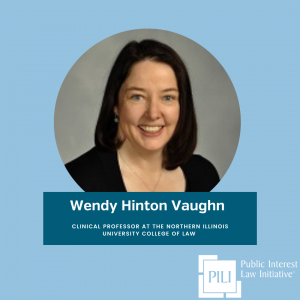 Wendy Hinton Vaughn is a Clinical Professor at Northern Illinois University College of Law (NIU) and the supervising attorney of the law school’s Zeke Giorgi Legal Clinic in Rockford. Professor Vaughn co-directs NIU’s new COVID-19 Legal Response Clinic, which provides remote legal advice and information to clients across the state of Illinois. One way they have been doing this is by working with students to answer questions on Illinois Free Legal Answers.

Professor Vaughn joined NIU College of Law in 2007. At NIU, she teaches clinical courses, as well as Family Law and Poverty Law in Theory and Practice. Professor Vaughn directs the Civil Justice Clinic at NIU, which provides representation to clients in order of protection, family law, and elder law matters.
In 2021, the Illinois Supreme Court appointed Professor Vaughn as a Commissioner to the Illinois Supreme Court’s Access to Justice Commission for a second three-year term. Additionally, Professor Vaughn is a founding member of the Board of Directors of Children’s Safe Harbor, which provides supervised visitation and supervised exchange services for children in Winnebago and Boone Counties.

Before coming to NIU, Professor Vaughn worked as the supervising attorney of the Family Law Advocacy Group at Neighborhood Legal Services of Los Angeles County and previously as the legal director of Levitt & Quinn Family Law Center, a non-profit organization in Los Angeles, California. After law school, she served as a supervising attorney and as director of the Intake Program, and previously as an Equal Justice Works Fellow, at the Legal Aid Society of the District of Columbia. She received her J.D. from New York University School of Law and has a B.A. in International Studies from Southwestern University in Georgetown, Texas. 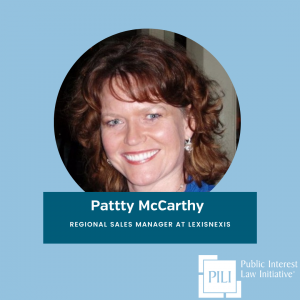 Patty McCarthy is a Regional Sales Manager with LexisNexis where she leads a team of Practice Area Consultants who work with large law firm customers and law schools. Over her 20 years with LexisNexis, she has worked with law firms across the country to help them leverage and utilize the LexisNexis investments to assist them in serving their clients and growing their business. Patty embraces the LexisNexis corporate values to promote the Rule of Law. Patty is a new member of the Board of Managers for the Chicago Bar Association and was previously a member of the Board of Directors of the Constitutional Rights Foundation of Chicago.

Patty joined LexisNexis after practicing as a litigator for seven years. During law school, her work experience included: summer associate at McConnell, Valdes, Kelley, Sifre, Griggs & Ruiz-Suria in San Juan, Puerto Rico and an internship at U.S. Environmental Protection Agency, Office of Regional Counsel in Chicago. Patty received her JD from DePaul University College of Law and graduated with a B.S. with Honors in Business Administration with concentration in Accounting from the University of North Carolina at Chapel Hill. 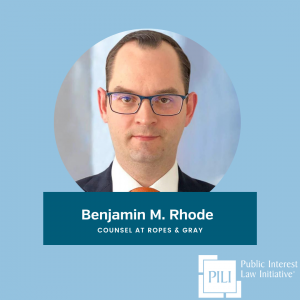 Benjamin Rhode is a counsel in Ropes & Gray’s business restructuring group. Ben’s practice focuses on all aspects of corporate restructuring, bankruptcy and insolvency proceedings for a variety of stakeholders, including, public and private companies, boards, financial sponsors and investors in complex situations in national and international capacities. Additionally, Ben’s expertise intersects various industries including automotive, retail, oil & gas, health care, communications, gaming and media & entertainment. Ben has also been involved in a variety of pro bono matters over the course of his career, including advising several nonprofit organizations in navigating financially distressed situations.