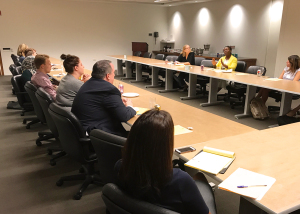 Representatives from area law schools recently met for PILI’s annual Law School Pro Bono Roundtable. While there, they discussed the success of a Justice Bus Program, the impact of the current presidential administration on public interest law, and recent rule and requirement changes affecting law schools.

During the program, a representative from OneJustice, a public interest law agency in California, called into the meeting to explain the Justice Bus Project to the group. The Justice Bus Project takes teams of attorney and law student volunteers from urban areas to set up legal clinics for low-income individuals in rural communities. Attendees discussed developing a similar program in Illinois to provide law students with a Justice Bus volunteer opportunity while providing legal services for people in need.

Next, attendees discussed the impact of the current administration on law students and public interest law. Attendees reviewed what was happening with the loan forgiveness program and what could happen if that program is changed or eradicated. They also discussed the possibility of law students being less interested in government jobs, but that there had been a recent surge in attention towards public interest law since the election.

One of the major recent rule changes was the American Bar Association’s reversal of their position on students receiving school credit for paid work, leaving open the possibility that students could now get credit for their paid internships. Different schools shared their positions on this issue. PILI recently decided to allow PILI Interns to receive school credit if both the student’s law school and Internship agency approve.

Another regulation affecting law schools is the New York State Bar’s requirement that students do 50 hours of pro bono work before being admitted. Since a significant number of students are interested in moving to New York after law school, law schools in Illinois are considering how to address this requirement. Many law schools are now implementing a pro bono requirement for their students or aspire to do so. Law schools also have or are planning to establish a pro bono pledge, asking students to maintain an active pro bono practice after graduation.

Thank you to all who attended and assisted with this program.

Register for the Illinois Forum on Pro Bono on October 3rd »