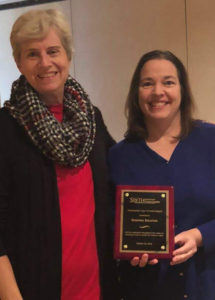 You may submit a self-nomination or nominate a colleague, and you may also submit multiple nominations. The awards are intended to recognize pro bono legal services rendered in the last twelve months. It only takes
5-10 minutes to complete the nomination form.

Ramona Sullivan (2018)
Ramona has served the community as a legal aid attorney for over 20 years as a staff attorney at Land of Lincoln Legal Assistance, a pro bono volunteer and now as a public defender. Ramona has represented thousands of people in central Illinois, including several hundred cases involving domestic violence. During her career, Ramona helped to establish legal self-help centers and pro bono networks in several counties in Illinois, ensuring that people who cannot afford an attorney still have access to justice.

Ruth E. Wyman (2018)
Ruth is a dependable pro bono volunteer. In addition to assisting her pro bono clients, she volunteers at La Linea, a bilingual community helpline run through the New American Welcome Center at the University YMCA. This past year, she helped to organize free legal clinics for immigrants with the University YMCA and the Urbana Free Library. Ruth has provided Know Your Rights training, assisted with DACA renewal applications and provided free legal consultations to immigrants in Champaign County.