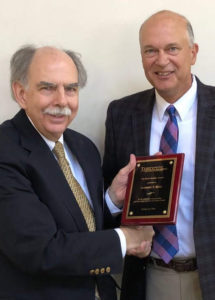 You may submit a self-nomination or nominate a colleague, and you may also submit multiple nominations. The awards are intended to recognize pro bono legal services rendered in the last twelve months. It only takes 5-10 minutes to complete the nomination.

Nominations for the 2019 award are now closed. Award recipients will be chosen by the Third Judicial Circuit Pro Bono Committee and announced in September. They will be recognized at the Celebrate Pro Bono Luncheon on October 24th at the Leclaire Room at Lewis and Clark Community College in Edwardsville.

Pro Bono Service Award: Leonard F. Berg, Attorney at Law (2018)
Leonard provides guidance that combines elements of the law and social services. In his private practice, he focuses on assisting the elderly, people with disabilities and their families. He regularly takes these cases on a pro bono basis through Land of Lincoln Legal Assistance Foundation and Catholic Charities. He generously shares his expertise on issues such as estate planning, adult guardianships and securing benefits by consulting with Land of Lincoln and presenting at CLEs. Through his work, he ensures more clients in need receive access to legal assistance.

Pro Bono Community Award: Ted N. Gianaris, Simmons Hanly Conroy (2018)
Ted is passionate about providing access to justice for those in need and has been a driving force behind his firm’s pro bono efforts over the last 12 months. An active member of the legal community, he has coordinated a volunteer paralegal program to assist with Madison County’s Order of Protection docket, planned and participated in an annual pro bono expungement project for Madison County residents, and serves on Land of Lincoln’s Board of Directors. Additionally, he has his own pro bono practice and takes prisoners’ rights cases from the Southern District of Illinois.