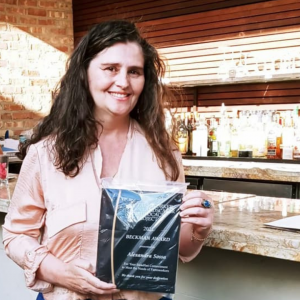 Alexandra has 32 years of experience in community outreach and advocacy, working predominantly with very low income Latinx immigrants. Her background ranges from direct public service with coffee plantation workers in Colombia to working at the Spanish Mexican Embassy.

With FLAP, Alexandra serves as a liaison between the Latinx and Hispanic community and resources. Alexandra works on the ground with FLAP and other local organizations, including the Mexican Consulate in Chicago, to dismantle workplace exploitation.

Access to education, employment resources and legal aid for the Latinx and Hispanic community, regardless of immigration status, is a human right. However, historical, political and social barriers impede Latinx and Hispanic workers in Illinois from having equal access to legal information and resources, Alexandra emphasized.

“It can be difficult to reach out to the population because they don’t want to raise their profiles,” Alexandra said.

While the services FLAP provides, specifically legal aid services, are in high-demand, connecting folks to those resources can be a challenge, Alexandra explained.

Expanding access to information and resources is an essential component of FLAP’s work. For example, FLAP has an established partnership with the Mexican Consulate in Chicago, faith-based organizations and other non-profits to conduct daily Know Your Rights Workshops across the state.

“We see on average 300 people per day. We take these groups of people and talk to them about their rights and work and their legal options when they have entered migration. We also have one for women, of course, and it covers questions specific to Latinas who feel the need to speak out about discrimination, and sexual harassment and other issues they are facing. It’s a conversation about options and resources that they may have.” Alexandra explained.

As the Bilingual Executive Director of FLAP, Alexandra Sossa has changed the lives of thousands of Illinoisans through advocacy and community outreach. During her 20 years of leadership, FLAP has filed  210 cases on behalf of workers who were not paid appropriately, recovering nearly 5 million dollars in damages and wages. You can read more about Alexandra and her impactful career on FLAP’s website.

If you would like to help more with FLAP’s mission, they have many opportunities to aid the Latinx/Hispanic community across Illinois. FLAP has many opportunities to join their organization, including  internships, externships, administrative positions and a Board of Directors position. They also need volunteer pro bono attorneys in various parts of the state. You can find more information on volunteer and career opportunities at www.flapillinois.org/call-to-action/.

Alexandra left us some parting words about what she wishes more people knew about the Latinx/Hispanic community that FLAP serves:

“We are very hard workers,” she said. “We also have families. We need to work to support our families – and we want a better life for our families than the life we had in our country. That’s why we are here in the United States and Illinois, working hard to improve the life of our kids and our families. It doesn’t matter what the immigration status is – we deserve to be paid for our work and we deserve to be treated as human beings by the law.” Alexandra said.