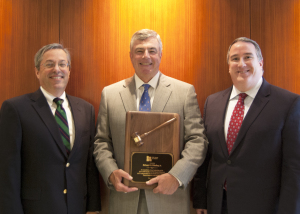 At the July 28, 2016 meeting of PILI’s Board of Directors, the board thanked Dick O’Malley of Sidley Austin LLP for his service as Board President at the end of his two-year term.

Dick joined PILI’s board in 1999, and has served as President since September 2014 during a time of significant growth at PILI. Some highlights from Dick’s presidency include:

Dick, who is Senior Counsel at Sidley Austin, focuses his practice on intellectual property and complex commercial litigation, and is the firm’s Chicago chair of its Pro Bono and Public Interest Law Committee. Dick has been actively involved in pro bono since the beginning of his career, and his pro bono work has included several notable cases over the years. In particular, he was recognized for his work on behalf of the residents of the Cabrini Green housing project, a case that was in litigation for six years. Dick and a team of attorneys from LAF were able to help avoid the threatened immediate eviction of residents by the Chicago Housing Authority, and finally reached a resolution that allowed the residents to leave Cabrini Green and start new lives on better terms. Dick received LAF’s Champion of Justice Award as well as the U.S. District Court for the Northern District of Illinois and the Federal Bar Association’s Award for Excellence In Pro Bono Service for his work on this case. In addition to his board service with PILI, Dick served on the Board of Directors for CARPLS for many years.

We are so very grateful for Dick’s work and leadership over the last two years!