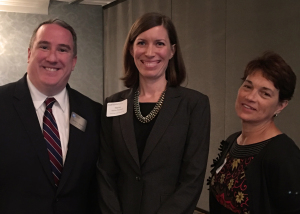 During the last week of June, PILI co-sponsored two Forums on Pro Bono: one in Mattoon hosted by the Fifth Judicial Circuit Pro Bono Committee and one in Rock Island hosted by the Fourteenth Judicial Circuit Pro Bono Committee. The topic of both forums was “The Future of Pro Bono and How You Can Help.” These programs each included a panel presentation, roundtable discussion and networking reception.

The panelists presented information on the need for and importance of pro bono, the efforts to increase pro bono locally and state-wide, and the ethical issues in pro bono. Speakers included PILI Executive Director Michael Bergmann, local judges, and staff from Land of Lincoln Legal Assistance Foundation and Prairie State Legal Services. 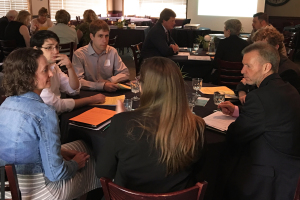 After the panels, attendees were given an opportunity to share their own ideas and concerns about pro bono during small roundtable discussions. They discussed how to recruit and support pro bono volunteers, barriers and challenges to pro bono, and creative strategies to increasing pro bono. The Pro Bono Committees will use notes from the roundtables to plan future CLEs, programs and volunteer opportunities.

Attendees at both forums agreed that, as a result of the program, they learned something new about the need for pro bono and how to help people in need.

Thank you to everyone who attended, presented on a panel and contributed to the discussion. Our next Forums on Pro Bono will be in Monticello on September 8th, hosted by the Sixth Judicial Circuit Pro Bono Committee, and Chicago on September 21st.