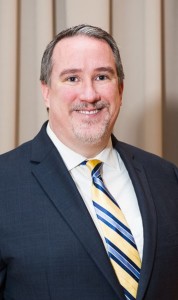 At the Annual Meeting of the American Bar Association in Chicago last week, Michael G. Bergmann, the Executive Director of the Public Interest Law Initiative (PILI), was named Chair of the ABA’s Judicial Division. Michael is the first public interest attorney to hold this position and only the third non-judge to do so in the Division’s history. Michael has now chaired two of the ABA’s seven divisions before the age of 40: in the 2012-2013 bar year, Michael chaired the ABA’s Young Lawyers Division and was the first public interest attorney to chair that Division as well.

Michael follows the outgoing Judicial Division Chair, Magistrate Judge David J. Waxse of United States District Court for the District of Kansas, as well as Chief Justice Mark Martin of the North Carolina Supreme Court, who chaired the Division during the 2013-2014 bar year. “Michael has been extremely active within the ABA Judicial Division and his experience will serve him well as Chair. His leadership in the organized bar and in facilitating pro bono service demonstrates the important role that lawyers play within the Judicial Division, and I look forward to seeing the Division’s important work continue during his tenure as Chair,” Chief Justice Martin said.

The Judicial Division has over 4,000 members, including judges from federal, state, local and tribal courts at the trial and appellate levels, as well as state and federal administrative law judges and lawyers who practice in all of these courts, court administrators, legal academicians and law students. The Division’s theme for this year is “Building Confidence in the Justice System,” with a focus on diversity, public education, obtaining and retaining a talented judiciary, and ensuring high quality in the justice system.

“Improving our justice system has been the passion and focal point of my legal career,” says Michael. “It is my privilege and honor to serve as Chair of the Judicial Division during the coming bar year, and I look forward to working with my lawyer and judicial colleagues in pursuit of this goal.”

Michael has worked at PILI since 2006, and became Executive Director in 2010. During his tenure at PILI, he has significantly grown PILI’s Law Student Internship Program, and has overseen the development of innovative pro bono committees at the judicial circuit level across Illinois. He has handled pro bono matters himself through Chicago Volunteer Legal Services, Lawyers’ Committee for Better Housing and the National Immigrant Justice Center. In addition to his service with the ABA, he is a member of the Illinois State Bar Association and the Chicago Bar Association, having served on and chaired committees for both of these bar associations. Frequently recognized for his contributions to the bar and the public, Michael was named one of “40 Under 40 Illinois Attorneys to Watch” in 2013 by the Law Bulletin Publishing Company.

NOTE: Chief Justice Martin’s comments are provided solely as a congratulatory acknowledgement of Michael’s selection as Chair of the ABA Judicial Division and do not constitute an endorsement of either Michael’s legal practice or of the Public Interest Law Initiative.