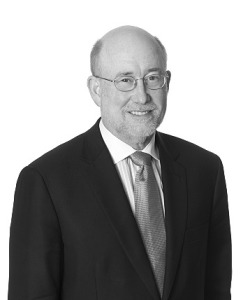 Kimball is a senior partner with the global law firm Winston & Strawn LLP. Throughout his nearly 40 years as a trial lawyer, Kimball has pioneered efforts for securing accessing to justice for low income individuals. He also has led public interest organizations, served in leadership positions at his law firm, exonerated a wrongfully convicted man, successfully challenged the Illinois Death Penalty, and argued civil rights cases before the United States Supreme Court and the Supreme Court of Illinois.

Kimball has only had two jobs in his life: a dishwasher at a Dairy Queen in college and attorney at Winston & Strawn, where he started working in 1977 and became partner in 1984. When the firm established a pro bono policy in 1991, Kimball became the chairman of the Pro Bono Committee.

Kimball joined PILI’s Board of Directors in 1989. From 2007 to 2008, he served as PILI’s Board President. This year, Kimball and his wife, Karen, are chairing the 40th Anniversary Awards Gala and have pledged $25,000 in support of the event.

Kimball and Karen have given back much to the community. As members of PILI’s Cornerstone Society, they fund a Law Student Internship stipend each summer. They also fund the Kimball R. Anderson & Karen Gatsis Anderson Public Interest Law Fellowship through the Chicago Bar Foundation. This fellowship awards one public interest attorney each year with a $50,000 stipend to repay their student loans. Additionally, they are involved with many nonprofits in addition to PILI, including the CBF’s Investing in Justice Campaign, CGLA, the Chicago Legal Clinic and more.

In 2016, PILI nominated Kimball and Karen for the American Fundraising Professionals “Distinguished Philanthropist” Award, which they received. Kimball has received many other awards, including the Spirit of Generosity Award from CGLA, the Cardinal Bernardin Award from the Chicago Legal Clinic and a Lifetime Achievement Award from LAF.

“Karen and I decided to chair the 40th Anniversary Awards Gala as a means of saying ‘thank you’ to everyone – the PILI Interns and Fellows, the PILI staff, and the PILI Board – for making PILI such a source of pride in the public interest community,” said Kimball.  “PILI truly makes a difference in our communities throughout the State of Illinois.  We hope that our leadership gift of $25,000 will inspire others to join us in saying ‘thanks.’”

Posted in Board Member Spotlights, News and tagged About PILI, Board member spotlight, News.