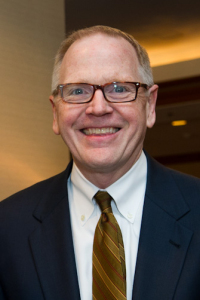 Jim Rolfes joined PILI’s Board of Directors in 1999, an important point in PILI’s history. Up until this time, PILI was almost exclusively an Internship and Fellowship organization, but was starting to think about expanding to create the Pro Bono Initiative Program. Jim joined the working committee to help decide what the mission and purpose of the Pro Bono Initiative would be. To launch that program, PILI hosted a ceremony where law firms and corporations signed a pledge to commit to pro bono. “That is when I remember really getting involved,” Jim said.

Ever since, Jim has been actively involved with PILI, having served as Board President from 2010 to 2012 and as Chair of the Marketing & Communications Committee since 2014. In addition to his board service, he recently volunteered at PILI’s Legal Prep Community Law Clinic with PILI Alumni from Reed Smith and helped coordinate pro bono legal services from his firm for PILI.

“What I like best about serving on PILI’s board is being part of a group that really cares about the profession,” he said, “and cares about living up to its obligation to help people in need.”

Jim maintains an active pro bono practice beyond his service to PILI. He recently partnered with the ACLU and the National Immigrant Justice Center on a nationwide class action on behalf of immigrants seeking timely hearings on their claims of reasonable fear of torture or persecution if they returned to their originating countries. Many of these people had spent six months to a year in detention. Jim helped to craft a settlement agreement with the Department of Homeland Security to guarantee timely determinations for these people.

Additionally, Jim has also handled several death penalty cases, successfully getting three people off death row, and has also worked with the Shriver Center on impact litigation to assist with housing for the poor.

“The whole idea of PILI is that you have a concerned group of people who are trying to push the needle so that more people will have access to legal help,” he said. “I like being in that community and hearing their ideas about how to help those people.”

Posted in Board Member Spotlights, News and tagged Board member spotlight, News.