In 2022, one of PILI’s partners in its work, Land of Lincoln Legal Aid is celebrating its 50th Anniversary and hosting celebratory events across its service territory. The first such event was held on April 7th in Champaign at the University of Illinois. At this event, several awards were presented by Land of Lincoln. PILI’s Executive Director Michael Bergmann received the Russell K. Scott Equal Justice Award, which is given to a judge or member of the bar who has demonstrated outstanding leadership in promoting and supporting legal aid and/or expanding and improving access to justice for low-income people. A careerlong public interest lawyer, Michael joined PILI in 2006 and has served as its Executive Director since 2010. 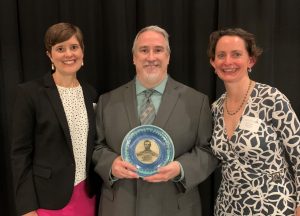 In nominating Michael for this award, Land of Lincoln’s Eastern Regional Office Managing Attorney Susan Zielke said, “Our longstanding partnership has allowed me a firsthand view of Michael’s efforts to expand PILI’s work throughout Illinois. The circuit-wide pro bono committees he has spearheaded provide needed support to legal aid staff as they seek to engage private attorneys in pro bono practice and create new pro bono opportunities on a regular basis. The expansion in placing PILI Interns and Fellows across the state has led to more legal aid clients being served, more legal aid attorneys careers being launched, and more private attorneys finding their lifelong passion for pro bono work. His direction to move PILI into more direct service has expanded access to legal advice and representation throughout Illinois. He was an obvious choice for the Russell K. Scott Equal Justice Award for his outstanding leadership in promoting and supporting legal aid and expanding and improving access to justice for low-income people.”

Also honored by Land of Lincoln at the event were Illinois Supreme Court Justice Rita B. Garman who received the Lois Wood Lifetime Achievement Award, HOPE of East Central Illinois which received the Ethel Sylvester Community Award and the law firm of Heller, Holmes & Associates which received the M. Ann Hatch Award. In accepting her award, Justice Garman said, “We celebrate how far we’ve come, and I challenge you all to do even more to serve justice.”

In accepting his award, Michael said, “It is an honor to receive this recognition from such a vital and vibrant organization as Land of Lincoln. We at PILI could not ask for a better partner in our work and I know the clients served by Land of Lincoln couldn’t ask for better advocates. Thank you to Clarissa, Susan and all of the amazing and tirelessly hardworking people of Land of Lincoln.”

Land of Lincoln Legal Aid Executive Director Clarissa Gaff said this, “It was our pleasure to present Michael with the Russell K. Scott Equal Justice in recognition of his decades-long work to expand access to justice for Illinoisans, regardless of income. Michael and PILI have been an important partner of ours and instrumental in promoting pro bono work throughout our 65 counties.”