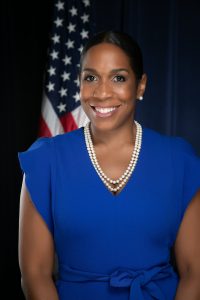 We are excited to announce that the first stop on the Annual Pro Bono Reception’s Virtual Pro Bono Tour will be in Springfield to visit Illinois Lieutenant Governor Juliana Stratton! Lieutenant Governor Stratton is a PILI Alum, having done a PILI Law Student Internship at the Lawyers’ Committee for Civil Rights. She also leads the Justice, Equity and Opportunity Initiative, including chairing the Restore, Reinvest, and Renew (R3) program, of which PILI is an inaugural grantee. We are excited to have her join us for this event!

Lieutenant Governor Stratton’s entire career has focused on bringing people together, building consensus, and solving problems. She started her own consulting firm focused on alternative dispute resolution and served as a mediator, arbitrator and administrative law judge for several government agencies. Lieutenant Governor Stratton previously served as Director of the Center for Public Safety and Justice at the University of Illinois at Chicago, Executive Director of the Cook County Justice Advisory Council, and as a Deputy Hearing Commissioner for the City of Chicago Department of Business Affairs & Consumer Protection, all with a focus on improving public safety and building stronger communities.

As a lifelong advocate for youth and creating safe spaces for our young people, Lieutenant Governor Stratton is a restorative justice practitioner and trained peace circle keeper. She was also a founding board member of the Chicago Children’s Advocacy Center and served on the Board of Directors of the Juvenile Protective Association.

Lieutenant Governor Stratton was born and raised on the South Side of Chicago. She is the proud graduate of the University of Illinois at Urbana-Champaign and DePaul University College of Law. She and her husband Bryan live in the Bronzeville community and have four daughters. And when she can find a bit of free time, she enjoys going to concerts, a good documentary, and training for marathons and triathlons.

You can join us and Lieutenant Governor Stratton on June 16th at noon for the Virtual Annual Pro Bono Reception!