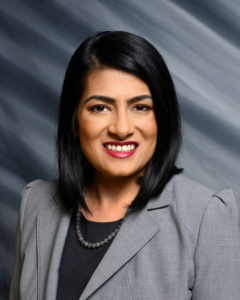 Reena Bajowala is a “Double PILI,” having served as a PILI Law Student Intern at Chicago Volunteer Legal Services (CVLS) in 2003 and as a PILI Graduate Fellow at the Roger Baldwin Foundation of ACLU Illinois in 2005. Reena co-founded and served on PILI’s Alumni Network Leadership Council and later served as a PILI board member.

Now a partner at Ice Miller LLP, Reena has a robust pro bono practice and has successfully handled a variety of complex pro bono cases. She helped secure the first public settlement for, and obtained restitution on behalf of, a human trafficking victim. She has helped clients from Africa and Central America in seeking political asylum, served as first chair on a Section 1983 prisoner rights case, filed an amicus brief on behalf of dozens of Asian-Pacific American organizations to contest racial injustice in a criminal case, and worked on a Fair Housing Act trial that involved more than one million pages of documentation and 60 depositions.

All of the pro bono cases Reena has handled over the years have focused on equal access to justice and leveling the playing field for the poor and underrepresented. Reena also works to advance diversity in the legal profession and serves on CVLS’ Advisory Board and the board of the Albany Park Theater Project.

“I have known Reena since she interned for us in 2003. While the work she did for us that summer was very different from the powerful pro bono litigation she handled later, her dedication to helping low income clients, her strength as a person and an attorney and her commitment to equal justice, were on display back then as they are now.” – Margaret Benson, Executive Director at CVLS