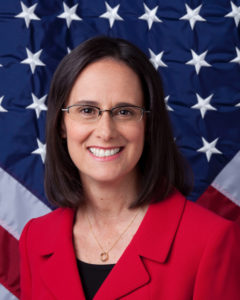 Often recognized for her leadership and integrity, Lisa Madigan has brought a high level of activism to the Office of Illinois Attorney General and has been a champion for state funding for civil legal aid.

In 2012, Attorney General Madigan played a lead role in litigation that resulted in the National Foreclosure Settlement. Illinois received $105.8 million in the settlement and Attorney General Madigan directed it towards helping those impacted by the foreclosure crisis. She dedicated $20 million to civil legal aid and $5 million to mediation services to assist impacted homeowners and renters.

In 2015, the Attorney General’s Office was involved in a national consumer case and directed $7.2 million in settlement award funds to the Illinois Equal Justice Foundation to support its operations and grants program.

Most recently, Attorney General Madigan welcomed the Illinois Armed Forces Legal Aid Network funding into her budget. During its inaugural year, the network has served the civil legal needs of over 2,600 veterans, service members and their families.

“It is no exaggeration to say that Lisa Madigan has served as a life line for funding for civil legal aid in Illinois. Thank you is simply not an adequate enough word to express the gratitude the legal aid community and the clients we serve feel for General Madigan’s support. Lisa Madigan’s vision, commitment and tireless advocacy will be missed.” – Leslie Corbett, Executive Director at Illinois Equal Justice Foundation