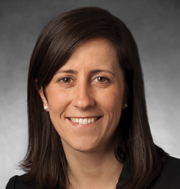 PILI is delighted to announce that Elizabeth P. Lewis, a partner at McDermott Will & Emery, has been elected to serve on our Board of Directors. A former PILI Fellow, she has been a member of PILI’s Alumni Network Leadership Council since 2011 and has served as Chair since 2013.

“I am thrilled to join the PILI Board of Directors.  I have been involved with PILI since serving as a PILI fellow in 2006,” Elizabeth said. “PILI has provided critical guidance and support at every step in my career since that point, regularly reinforcing the need to provide access to justice and bringing together the community and the tools to advance that cause.  I am excited to work more closely with the staff and the Board.”

Elizabeth has an active pro bono practice, representing children and families in a wide variety of education, school discipline, custody and visitation cases. She also regularly works with nonprofit organizations on tax exemption issues. She co-chairs McDermott’s Chicago office Pro Bono Committee and is also a member of the Young Professionals Board of the Chicago Bar Foundation.

Frequently recognized for her pro bono contributions, Elizabeth has received pro bono awards from McDermott, PILI and others. She was the 2012 recipient of the Maurice Weigle Exceptional Young Lawyer Award from The Chicago Bar Association and The Chicago Bar Foundation. She was also part of a team of four McDermott attorneys who received the Northern District of Illinois’ Award for Excellence in Pro Bono Service in 2013, and in 2014 she was named an Illinois Rising Star by Super Lawyers Magazine.

Elizabeth will take her place on PILI’s Board of Directors on September 1st, following the appointment of Donald B. Hilliker, also of McDermott Will & Emery, to a Life Director position on PILI’s Board. Donald has served as a Board Member for PILI since 2006.

PILI featured Elizabeth in our Alumni Spotlights whens she became Chair of the Alumni Network Leadership Council back in 2013. Read her spotlight here »

Learn more about our Board of Directors »

Posted in Alumni, News and tagged Alumni, board, News.