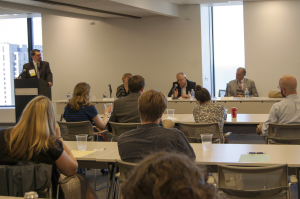 On June 28th, attendees of PILI’s Alumni CLE & Networking Reception got a behind-the-scenes look at a major pro bono collaboration between two large law firms and two legal service organizations. This decade-long class action lawsuit against the Illinois Department of Corrections resulted in significant improvements in mental healthcare for prisoners in the state.

Coming Together for a Cause

This case began with Ashoor Rasho, a prisoner who suffers from mental illness and was not receiving adequate treatment in prison. He wanted to bring a case against the prison system regarding his lack of treatment.

Harold Hirshman from Dentons (US) LLP and Marc Kadish from Mayer Brown LLP both had strong reputations for their pro bono work. Harold had been involved in many high profile pro bono cases since the 1970s, and Marc was similarly active as the Pro Bono Coordinator at Mayer Brown. After hearing about the case and the state of mental healthcare within the prison system, they agreed to assist.

Meanwhile, Amanda Antholt from Equip for Equality and Alan Mills at Uptown People’s Law Center had been trying to improve the prison system through their work as well. They saw the case as an opportunity to make a difference and signed on.

The panelists at the CLE, which included Harold, Marc and Amanda, all emphasized that the case could not have been fought by any one person, law firm or organization. Each individual and group played a unique roll and contributed to the case in an important way.

One example of the importance of collaboration that the panel discussed was evidence gathering. The legal aid organizations were able to compile information from prisoners who wrote to their organizations. They responded with a survey about the prisoners’ experience with mental health treatment in the prison system, and received many of the surveys back. The law firms would not have had that same type of access and communications with prisoners. Separately, Mayer Brown was able to pay an expert witness to come in and evaluate the current state of the mental healthcare system. The nonprofits working on the case would not have had those types of resources. Each of these instances provided evidence in the case that was eventually used in the settlement negotiations.

Attendees at the CLE agreed that having the different perspectives represented in the panel discussion was helpful in understanding the totality of the work involved in the case. “It was great to hear all the perspectives of both the legal aid organizations and firms,” one said.

Each of the panelists expressed surprise and frustration about how long the case took to settle. “This class action is like no other case I had ever worked on,” said Harold.

Because many of the parties involved with the prison were elected officials, the lawsuit often got held up by politics, elections and bureaucracy. The collaborative nature of the case allowed Harold, Marc, Amanda and Alan to persist and stay on the case for close to ten years. The result was a settlement that will fundamentally change and improve mental healthcare in the Illinois prison system.

Results of the Settlement

The results of Rasho v. Walker mean that nearly 11,000 prisoners with mental illness will now receive proper care. There are now limits and regulations to how long a mentally ill prisoner can be held in solitary confinement, and the prison system was required to hire more than 300 clinical staff to treat people with mental illness. Overall, the settlement meant a huge improvement in the care for mentally ill prisoners.

Feedback on the CLE

This panel discussion provided a lot of information about a pro bono collaboration on a case of this magnitude. Attendees agreed that, as a result of the program, they learned something new about pro bono partnerships.

PILI is grateful to PILI Alum and board member Dave Scriven-Young for acting as moderator for this discussion. We are also grateful to Dentons for hosting the event. You can learn more about the case and read settlement documents here »

The PILI Alumni Network Leadership Council hosts a CLE and Networking Reception every year. To suggest a topic for next year’s CLE, or to get involved with the Alumni Council, contact Program Manager Katie Pieper by email or by phone at 312-832-5128.