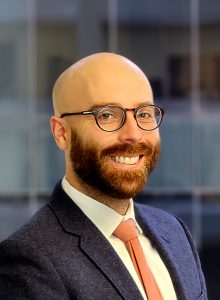 PILI is grateful to Marty Cozzola who has been serving as Chair of our Alumni Network Leadership Council for the last year and will conclude his term at the end of this month. Marty was a 2014 PILI Intern at Chicago Volunteer Legal Services where he also worked since taking the bar exam in 2015. We asked Marty a few questions about this involvement with PILI.

What have you been up to since your PILI Law Student Internship concluded?

I spent my 2L summer (in 2014) as a PILI Intern at Chicago Volunteer Legal Services (CVLS). I returned to Indiana University– Maurer School of Law for my 3L year, where (amongst other things) I helped publish the third volume of the fledgling Indiana Journal of Law and Social Equality. I joined the staff of CVLS after taking the bar in 2015 as a Staff Attorney in the Mortgage Foreclosure Mediation Program. I wore a variety of hats in my seven years at CVLS and spent several years working with our deceased borrower program and the Chancery Court Appointment Program. Most recently, I was made the Supervising Attorney for CVLS’ portions of the Illinois Armed Forces Legal Aid Network and Early Resolution Program.

I just wrapped up my time at CVLS last week and will have a little time off before I join the housing team at BPI (another PILI Participating Agency) in September. I’m excited to work on issues of fair and affordable housing at the macro level and I know the lessons I learned providing direct services to CVLS clients will prove invaluable during this next stage of my public interest career.

What was your favorite thing about being a PILI Intern?

If I was going for the cheap answer, I’d say the tasty catered lunches during each Intern & Fellow seminars! But the reality is that I don’t know if I would have been able to afford to live and work in Chicago during the summer of 2014 if I didn’t have my PILI stipend. I also used a bit of that stipend to buy a strong bike lock and a helmet and began riding one of my parents’ old steel bikes to and from my Internship. And just as the Internship strengthened my commitment to public interest law, those bike commutes helped me understand that the best way (for me) to navigate this City is on two wheels (something I’ve leaned into heavily over the last few years)!

How has your commitment to service played a role in your life and career?

I can trace my commitment to public interest to my parents: my mother is a psychologist and regularly treats patients who can’t afford to pay her, and my father spent his entire 42-year career as a legal aid attorney including more than two decades at Legal Aid Chicago. With those two as my role models, it’s hard for me to imagine a career without a commitment to advancing justice for low-income families throughout Chicago. That commitment has migrated into my personal life as well: I’ve served on several junior boards focused on housing and justice (including PILI’s Alumni Network Leadership Council) and was elected in 2017 to a community seat on the Local School Council an elementary school in my neighborhood.

Why do you like serving on the Alumni Network Leadership Council?

While I obviously enjoy any chance to advance PILI’s mission of advancing equal access to justice by connecting members of the legal community with those in need of legal assistance, serving on the Council is more than that. It’s an opportunity to serve alongside some of the most compassionate and brilliant advocates in the never-ending battle against poverty. It doesn’t hurt that many of the other folks on the Council are folks I now consider life-long friends, and I am very thankful that I was given the opportunity to “lead” the Council over the last year in my role as Chair. I’m looking forward to working with Marlow Svatek (my former PILI advisee) as she takes over the role in the fall and continuing to serve on the Council in the years ahead!