On December 1st, PILI will be recognizing three individuals and one organization for their efforts and dedication to pro bono work in their communities. PILI’s 45th Anniversary Awards Gala will bring together the Illinois legal community to celebrate PILI’s 45th anniversary as well as the very best ideals of the profession. PILI will celebrate these award recipients as well as the countless lawyers, law students, legal professionals, law firms and corporations who dedicate themselves to providing legal assistance to those in need and ensuring access to justice for all.

Congratulations to this year’s award recipients! 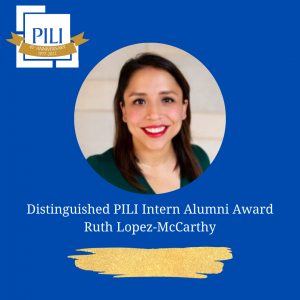 Ruth Lopez-McCarthy was a 2007 PILI Law Student Intern at Chicago Legal Clinic. She has since devoted 19 years of her life to supporting immigrant communities across the United States. Upon graduation from Chicago-Kent College of Law in 2009, she moved to Washington DC to become the DC Program Coordinator for the Fair Immigration Reform Movement, then the Deputy and Interim Field Director for Reform Immigration for America, and several additional roles as a campaigner for Immigration Reform. She then returned in 2013 to Illinois to lead the “Illinois is Ready” campaign at the Illinois Coalition for Immigrant and Refugee Rights. The opportunities to utilize her outstanding skill set as an attorney and campaigner continued with her role as Managing Attorney for the Legal Protection Fund, at the National Immigrant Justice Center. Responding to the extreme back-slide and threats to immigrant rights during the Trump Administration, she was able to lead a team that provided 6,500 immigration legal screenings and filed 3,500 immigration cases. She then went on to a 6-month contract as COVID Manager for Immigrant and Refugee Services with the Illinois Department of Human Services. Ruth was recently appointed to the role of Senior Immigration Fellow for the State of Illinois, where she has an opportunity to lead our state in helping immigrants and refugees further. 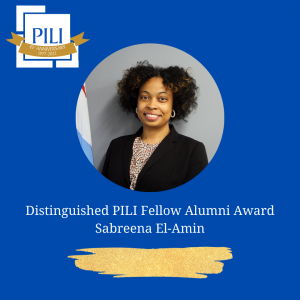 Sabreena El-Amin was a 2014 PILI Graduate Fellow at Legal Aid Chicago, sponsored by Winston & Strawn LLP. She was subsequently an associate with Jackson Lewis and Sabreena joined the Office of Inspector General in 2021 as the Director for Diversity, Equity, and Inclusion. She is an attorney with an extensive background in labor and employment law, including litigating and advising on various discrimination matters. Her volunteer, educational, and employment experiences mirror her devotion to issues at the confluence of criminal justice: racial equity, community development, psychology, and the law. Most recently, Sabreena joined as an adjunct faculty member at the University of Illinois Chicago Law School. She has also shown a commitment to public service through her experience with PILI, where she originally served as a PILI Law Student Intern at the Department of Health and Human Services while in law school. She went on to serve as the founding chair of its Young Professionals Board and continues as a member, served as Co-Chair of the Diversity, Equity & Inclusion Working Group, and now serves on the Justice, Equity, Diversity & Inclusion Committee. She is a native of Chicago’s South Side and a graduate of Whitney Young High School. Sabreena earned a BA in Psychology from DePaul University and a JD from Harvard Law School, where she served as a Contributor and Editor for the Journal of Racial and Ethnic Justice. 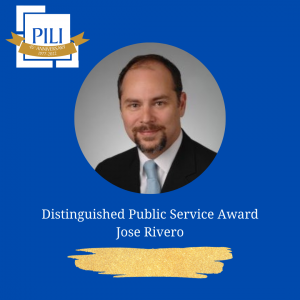 Jose Rivero is an attorney with Cullen Haskins Nicholson & Menchetti, P.C., while also serving as Chairman of the Board for the Farmworker & Landscaper Advocacy Project (FLAP), an organization dedicated to improving working conditions and opportunities for low-income workers and their households in a wide variety of industries through advocacy, community outreach and education, litigation, community legal education, information and referrals, partnering with other organizations to fight human labor trafficking, preventing family separations by helping immigrants secure dual citizenship for their children and facilitating access to cash transfers to very low-income populations. When Jose became the Board Chair FLAP’s budget was under $50k, and now it excesses $2.5 Million. FLAP had only one paid staff and one volunteer attorney, and now FLAP has 11 staff and is in the process of hiring more staff to join the organization. Under Jose’s leadership, FLAP has created partnerships with over 200 organizations, including 69 law firms all over Illinois. Jose’s leadership has guided the organization to be able to serve an average of 250,000 very low-income workers per year. 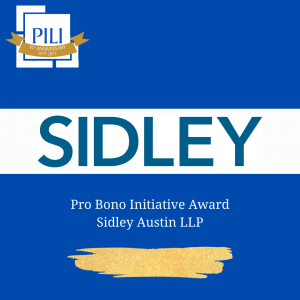 Sidley has a long history of advancing pro bono legal services in Chicago. In 1972, Sidley named Thomas Morsch to head the firm’s Pro Bono and Public Interest Law Committee.  In the years that followed, Sidley’s pro bono efforts included seeking to speed up integration efforts in Chicago public schools and pursuing legal action against landlords accused of discrimination. The firm continued to demonstrate its commitment to pro bono under Dick O’Malley’s leadership. Dick joined PILI’s Board of Directors in 1999 and served as the President from 2014-16. In this time, Sidley launched multiple firmwide pro bono initiatives aimed at helping people sentenced to death, immigrants, and veterans. Sidley’s pro bono legacy continues to this day. In its Chicago office alone, Sidley has three Pro Bono Counsel who promote and oversee pro bono work by lawyers at the firm. In 2021, 83% of Chicago lawyers at Sidley participated in pro bono matters totaling 37,345 hours. And, in 2022, Sidley’s Chicago office has already contributed 28,035 hours to pro bono engagements through September. Sidley has helped numerous law departments at corporations become involved in pro bono work through partnering efforts.